What is it about ?
Also called allspice or Indian wood, allspice is an amazing spice that does not smell. Containing no piperine, it is neither part of the pepper family nor that of chili peppers. They are large berries with flavors of nutmeg, cinnamon, cloves and black pepper, cultivated mainly in the tropics of America.

Allspice in berry or ground ?
Mainly used in its ground form, allspice berries enhance marinades or infusions such as liqueurs for example. Being of a rather large diameter, the berries of the allspice may not pass through a conventional spice mill, it is often necessary to crush it in a mortar beforehand. As with all spices, allspice keep best whole, but are easier to use when already ground.

How to use allspice in cooking ?
Allspice is used in many dishes, especially in exotic cuisine. It’s very pronounced taste enhances marinades, stews, sauces, vegetable juices … And unlike some peppers, it is very resistant to long cooking. Thanks to its multiple flavors of black pepper, nutmeg, cinnamon and cloves, this spice also accompanies sweet dishes: fruit salads, compotes, gingerbread, chocolate cakes as well as fruit cocktails.

The virtues of allspice
Rich in vitamin C which is a natural antioxidant, allspice also contains vitamin A and B6. Its anti-inflammatory and antiseptic properties make it an ally in the fight against winter ailments. However, it is not recommended for people with gastric disorders (ulcer, diverticulitis, ulcerative colitis) 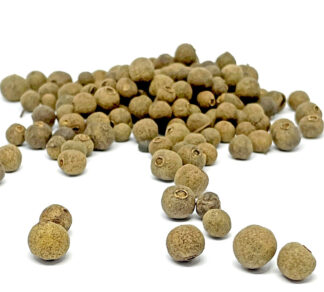