What is it about ?
Sesame, here native to Thailand, is one of the superfoods for its many dietary and therapeutic benefits. It is cultivated primarily for its seeds with a mild flavor similar to hazelnut and almond. White sesame has a slightly less pronounced taste than golden sesame, but its properties are better for the health because it does not undergo any treatment after harvest. Having become popular thanks to its use in traditional burger bread, sesame is a very popular cereal in pastry and baking.

How to use white sesame in cooking ?
White sesame, because of its very slightly spicy taste, is used mainly for its crunchiness. It is an essential ingredient in the preparation of many breads such as cereal bread for example. To consume both raw and cooked, it brings crunch in summer salads, vegetable dishes and goes very well with fish, white meats and poultry. Widely used in pastry making, it is present in a large number of oriental pastries such as Chebbakia, Babouches …

The virtues of white sesame
Qualified as a superfood, white sesame is very rich in vitamins (B1, B2, B6, E, etc.) and minerals: calcium, phosphorus, iron, manganese, magnesium, zinc, copper, etc. Its high fiber content helps regulate transit and relieve intestinal pain. Like flaxseed, white sesame contains one of the highest levels of lignans in foods that help regulate cholesterol and lower blood pressure. This cereal is also recognized for its antioxidant and nutritional virtues. 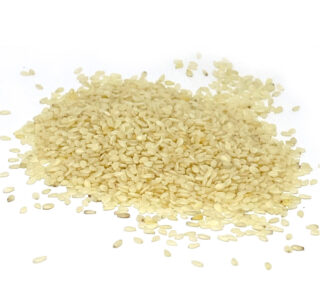